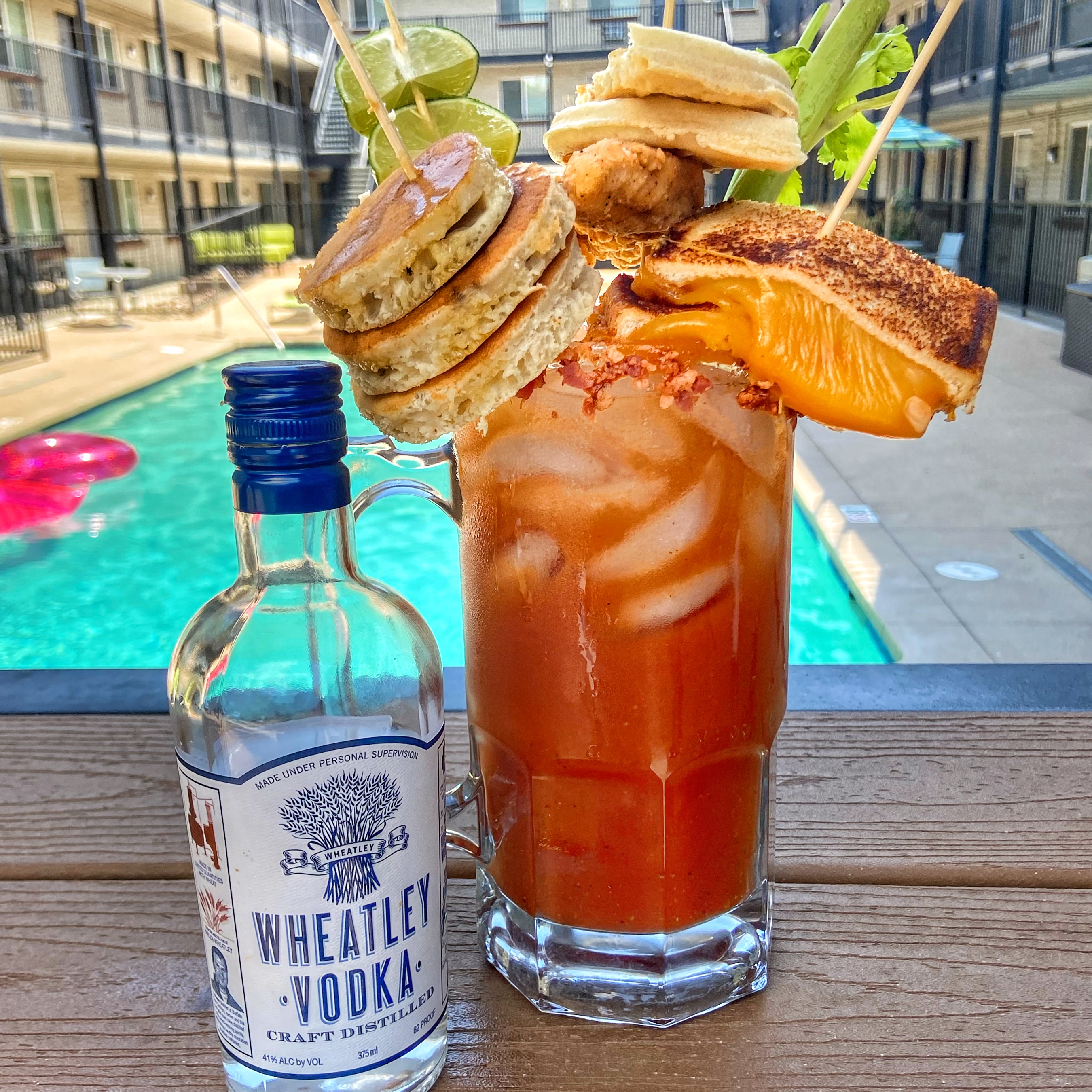 Summer 2020 is in full effect and it has been a memorable one to say the least. Life as we know it has been different, but that doesn't mean we have to complete change our traditions and routines. One thing I started to miss the most during quarantine was going out to brunch and ordering a bunch of delicious food and drinks. So, we decided to try making our own brunch at home! We've been cooking up new dishes like Eggs Benedict, Chicken & Waffles, and Banana Pancakes. Drinks have been flowing as well, mimosas and of course BLOODY MARYS.

My favorite Bloody Mary creation was the Massive Bloody Mary I made with Wheatley Vodka, which is a craft vodka that elevates cocktails and food recipes! It is 10-times distilled, made from the same red winter wheat grain used in Pappy Van Winkle Bourbon by Buffalo Trace Distillery. That being said, Wheatley Vodka adds an extra pop of flavor to any drink. Below is the recipe for you to try yourself!

1. Start by preparing the pancake mix as directed on the box. Heat a non-stick skillet over medium-low heat and spray with cooking oil. Spoon about 1/4-1/2 cup of the batter to make one large pancake. Once the pancake is lightly browned on both sides, transfer to a plate and set aside. Take a measuring cup and flip it upside down to cut small circles out of your large pancake. I used the 1/2 cup to cut two mini pancakes and then switched to a 1/4 cup for the third. Stack the three mini pancakes and put aside on a plate.

2. Add about 2 tablespoons of salted butter to the skillet, still over medium-low heat, and let the butter melt. Grab two slices of your white bread and throw them into the skillet, moving them around and coating them in the melted butter. Place 2 slices of Gouda and 1 slice of Cheddar on one of the slices and sandwich with the other slice. Using a spatula, press firmly onto the sandwich and place a lid on the skillet. After about 2-3 minutes, or until the bread is golden-brown, flip onto the other side and close the skillet with your lid. Cook until desired. Take off skillet, carefully slice in half, and set aside on the same plate as the mini pancakes.

3. Prepare 1 frozen waffle as directed on packaging. (I usually pop mine in the toaster). Once cooked, cut in half and set aside with the rest of the toppings.

4. Heat 1 of the prepared fried chicken tenders from your Deli department in the microwave or in the oven at 425 degrees for 2-5 minutes on each side. Once warmed, dip the chicken tender into room temp maple syrup and let drain. Once again, set aside on top of your cooked waffle.

10. Cut lime and lemon into quarters, set aside. You will now have all of your skewer toppings prepped.

5. On a small circular plate, sprinkle the Bacon Bits evenly. Take your 32 oz glass and bottle of Sriracha and carefully squeeze the hot sauce out onto the rim of the glass, coating it. Let dry for 30 seconds and then dip the rim into the bacon bits, coating the hot sauce thoroughly. This can get messy- but is WELL worth it.

6. Fill your 32 oz glass with ice. Measure and pour three 1.5 oz shots of Wheatley Vodka into the glass.

8. Skewer together your mini pancakes, sitting towards the top of the skewer and carefully add to Bloody Mary.

9. Add the fried chicken tender and both halves of the waffles to a skewer, sitting towards the top as well. Carefully place next to pancake skewer.

10. Take both halves of your grilled cheese and skewer them together, one on top of the other and towards the top of the skewer. Carefully add into bloody next to the last two skewers.

12. Take a photo, a sip, and enjoy! Post the photo and tag @wheatleyvodka.

*Wheatley Vodka can be found wherever you get your spirits or online at WheatleyVodka.com. Must be 21 or older to purchase.

For more information on Wheatley Vodka: